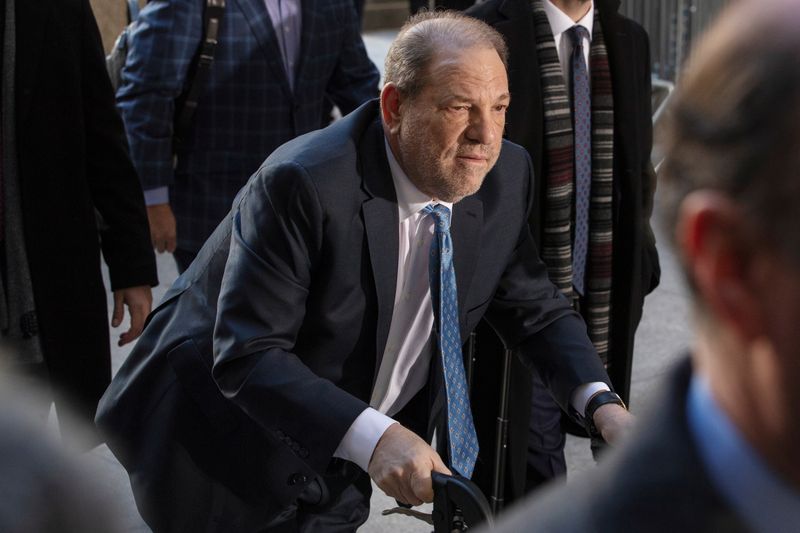 By Karen Freifeld
(Reuters) – Harvey Weinstein is sitting under guard in a cinderblock room at a New York City hospital days after his conviction for sexual assault and rape, and at times “can go stir crazy just staring at the emptiness,” according to a spokesman.
The former Hollywood producer was admitted late on Monday to a Bellevue Hospital unit for inmates, hours after a Manhattan jury found him guilty of sexually assaulting former production assistant Mimi Haleyi in 2006 and raping former aspiring actress Jessica Mann in 2013.
His conviction was a milestone for the #MeToo movement, which inspired women to accuse hundreds of powerful men of sexual misconduct. He is due to be sentenced on March 11.
Weinstein’s spokesman, Juda Engelmayer, said he spent about an hour and a half with him at the hospital on Friday reflecting on the case and what the future holds for Weinstein, who faces up to 29 years in prison. His lawyers plan to appeal the verdict. He is also charged with sexual assault in Los Angeles.
“It’s scaring him,” Engelmayer said in an interview. “I think he’s melancholy. He’s very, very low right now.”
He described a bare room with a bed, a stainless steel toilet with no seat and large windows. Guards are stationed outside the door.
Weinstein is allowed to make limited phone calls from a common area, the former producer’s spokesman said.
“He doesn’t like being left alone,” Engelmayer said. “When no one’s there, he said he’s just staring at the four walls. He can go stir crazy just staring at the emptiness.”
Engelmayer’s description contrasted with defense lawyer Arthur Aidala’s portrayal of his 67-year-old client after he visited him at the hospital on Tuesday.
Aidala said Weinstein appeared “upbeat” and “in pretty good spirits.”
Weinstein had been en route to New York City’s Rikers Island jail complex when he was diverted to Bellevue. Media reports said he suffered chest pain or heart palpitations.
Engelmayer said Weinstein suffers from diabetes and high blood pressure.
More than 80 women have accused the producer behind hit films including “The English Patient” and “Shakespeare in Love” of sexual misconduct. He has denied the accusations, said any sexual encounters were consensual, and has said he will appeal his conviction.
Actress Ellen Barkin, a friend of one of Weinstein’s accusers, Annabella Sciorra, wrote on Twitter on Tuesday: “He is in a private suite in Bellevue hospital. This is not what the jury had in mind.”
Attorney Gloria Allred, who represents some of Weinstein’s accusers, questioned on Saturday whether Weinstein was receiving special treatment instead of being treated at the Rikers infirmary. She said she was not speaking for her clients, just giving her personal opinion as a victim’s rights lawyer.
Responding to questions about Weinstein, a spokesman for the New York City Department of Correction said only that he was in their custody and that “health care is provided as appropriate.”
Among those standing by the former producer as he faces prison is William Currao, a retired physician and Weinstein’s college roommate at the State University of New York at Buffalo.
During the trial, Currao often appeared alongside his friend, sometimes carrying books for Weinstein, who he described as a “voracious reader.”
Currao said he would sometimes sleep at Weinstein’s home before they were driven to court in the morning. He said he could not “even fathom” abandoning Weinstein, as others had.”He’s a friend,” Currao said. “I can’t just cut off a friend because of what they’ve done or not done.”