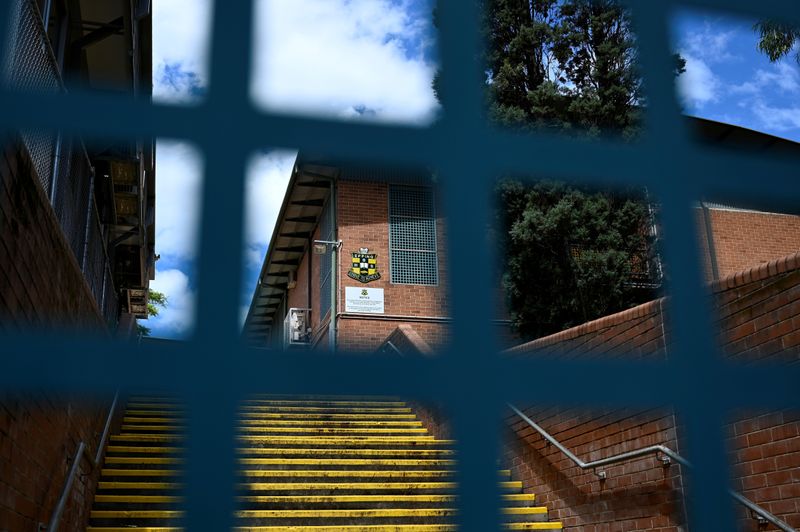 © Reuters. The site of Australia’s first ordered school closure due to the coronavirus is pictured in Sydney

By Swati Pandey SYDNEY (Reuters) – Two schools in the Australian city of Sydney closed on Monday after three students tested positive for the coronavirus, taking Australia’s tally of cases to more than 80 as the government prepares a fiscal stimulus to ward off recession. Australia has seen a worrying increase in coronavirus cases in the past couple of days, though Chief Medical Officer Brendan Murphy said the majority were travelers who caught the virus abroad, with only one instance of community transmission. Two year-10 students at Sydney’s St Patrick’s Marist College Dundas had tested positive for the virus while a year-7 pupil tested positive at the Willoughby Girls High School. “This is likely to be the new norm,” said Brad Hazzard the minister of health for New South Wales state. The school closures come days after another high school in Sydney shut down when a 16-year-old there tested positive. Epping Boys High School reopened on Monday though nearly 70 students and staff who had close contact with the infected student remained in self-isolation. The coronavirus has infected 107,000 people around the world in an ever-growing list of countries and caused hefty economic damage, prompting central banks to ease monetary policies. Three people have died in Australia. “This is a public health emergency of an unprecedented nature that our nation and that the entire global community is facing,” the health minister of Victoria state, Jenny Mikakos, told a televised briefing. Her state also recorded a jump in the number of cases after two people who recently arrived from the United States and one who returned from Iran were diagnosed as infected with the virus. “We do anticipate that this likely pandemic will have significant impacts on our health system. This has been my absolute focus, making sure that our system is prepared to respond,” Mikakos said. Worries about the hit to the economy saw nearly A$108 billion ($70.5 billion) wiped off Australian shares () in yet another day of panic selling in global financial markets. FISCAL RE-THINK? The Reserve Bank of Australia (RBA) last week became the first in the developed world to ease monetary policy to fight the economic fallout. The government is finalizing a fiscal stimulus package though the size of the measure is not known. An announcement on the likely A$10 billion package is expected this week, media reported. Economists are less optimistic about the scale of the stimulus. Citi economist Josh Williamson expects an initial package of A$3 billion to A$5 billion, or about 0.1% of Australia’s gross domestic product. “Such a package would be designed to offset the expected loss of output, rather than deliver a material boost to activity that closes the negative output gap that existed prior to COVID-19,” he added, referring to the illness caused by the virus.
“If the broader economy is impacted more severely than currently assumed, then the government could be forced to rethink its fiscal strategy in May, that is, abandon hopes of a near-term budget surplus and bring forward other stimulatory measures.”
Disclaimer: Fusion Media would like to remind you that the data contained in this website is not necessarily real-time nor accurate. All CFDs (stocks, indexes, futures) and Forex prices are not provided by exchanges but rather by market makers, and so prices may not be accurate and may differ from the actual market price, meaning prices are indicative and not appropriate for trading purposes. Therefore Fusion Media doesn`t bear any responsibility for any trading losses you might incur as a result of using this data.Fusion Media or anyone involved with Fusion Media will not accept any liability for loss or damage as a result of reliance on the information including data, quotes, charts and buy/sell signals contained within this website. Please be fully informed regarding the risks and costs associated with trading the financial markets, it is one of the riskiest investment forms possible.