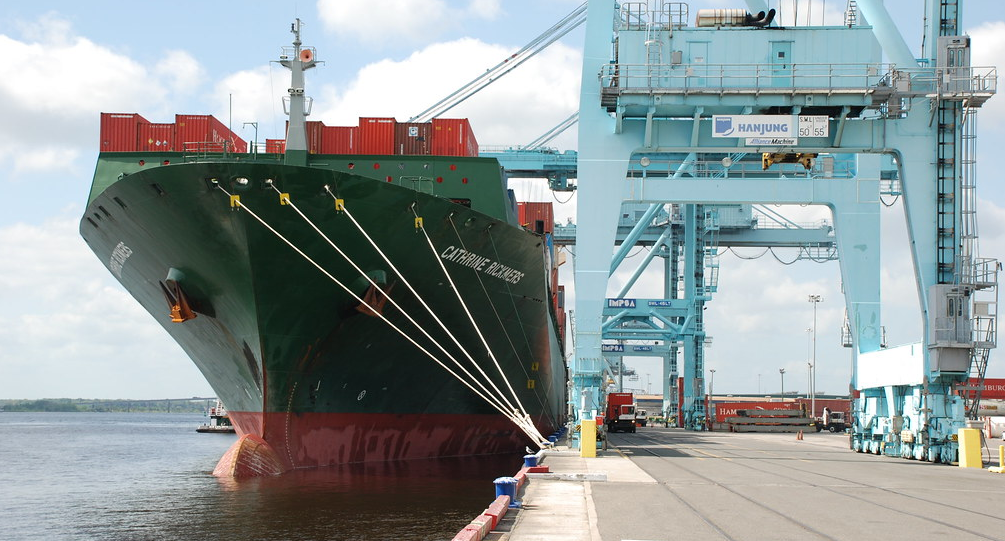 The false notion that the US has eliminated virtually all of its barriers to foreign imports has been repeated more and more in recent years. The claim is made both by advocates for free trade and by critics of free trade. For instance, Patrick Buchanan has claimed only American elites “are beneficiaries to free trade” while implying the US either has free trade, or something close to it. Rather than insulate US companies from global competition, Buchanan insists, the US practices “globalism” and has all but erased the US border when it comes to foreign goods.
Meanwhile, in many articles on tariffs, readers may encounter a graph like this, which suggests trade barriers have almost vanished:

But things are not nearly as free as they seem. Indeed, the idea that the United States embraces unconditional free trade —  while being victimized by foreign protectionists — is based largely on fantasy.
Nevertheless, a common narrative persists in which protectionism disappeared in the US thanks to a bipartisan consensus in favor of free trade following the Second World War. In the olden days, the story goes, the US protected American workers with high tariffs rates,  but now that tariffs are low,  jobs have been sucked out of the US by this near total absence of protectionism.
But, tariffs and protectionism are not the same thing. Many researchers treat tariffs as a reliable proxy for protectionism, but the rising prevalence of nontariff barriers in recent decades suggests looking only at tariffs is a mistake.
While the US did indeed cut tariffs and other trade barriers — often unilaterally — during the 1940s, “enthusiasm for further tariff cuts waned after 1950. The U.S. government made limited tariff reductions in the four rounds that followed the inaugural GATT [i.e., the General Agreement on Tariffs and Trade] conference in 1947.”
While it is true tariffs did not significantly rise again in response to mounting opposition to lowered trade barriers, other forms of protectionism did go up. What were these nontariff barriers? They include a wide variety of policies that include, among others:
Subsidizing US industries so as to help them out-compete foreign goods.Requiring government procurement of domestic products only (known as “public procurement” policies).Quotas on imports”Rules of Origin” Preventing “transshipment” of goods from third parties through countries with “free-trade” access.”Sanitary and phytosanitary measures” which are controls on the importation of foods affected by substances like beef hormones and “genetically modified oganisms.”Regulatory requirements on the production of foreign goods including mandates on foreign wages, labor unions, and environmental regulations.Requirements for packaging, labelling, and product standards.Since the 1950s, these barriers have been increasingly used by the US government and other governments to reduce imports, and “[n]ontariff barriers spread to substitute for the tariffs previously bargained away. Pressure began to surface for retaliation to punish trade partners for unfair trade barriers and unreciprocated tariff cuts. All of this was a prelude to the changes that would overtake U.S. trade policy in [the 1960s.
As political scientist Kerry Chase notes, by the 1980s, “pillars of US trade policy crumbled, “including the commitment to trade liberalization as pressure for nontariff barriers erupted in the 1970s.”
These strategies were applied for the same reasons tariffs were raised in the past: to protect domestic industries in response to pressure from constituents and lobbying groups.  From the late 1960s to the late 1980s,
Domestic producers in certain vulnerable industries, particularly labor-intensive manufacturers, pushed for legislation against imports … Those domestic producers in favor of restricting trade were initially successful in reducing imports a limited number of countries via quota-based agreements or voluntary export restraints (VERs). … These practices were gradually applied to other vulnerable industries, as well as to a broader set of countries. The effect was a significant loss of momentum in the reduction of trade barriers and an increase in trade barriers in certain areas.
Indeed, the total proportion of imports affected by nontariff measures increased from 25 percent in 1966 to 48 percent in 1986.
By 1990, trade liberalization again began to gain ground, and this helped drive political support for the North American Free Trade Agreement, which went into effect in 1994.
Yet, it is doubtful NAFTA approaches what can really be referred to as “free trade.” Both NAFTA and its successor agreement USMCA include numerous nontariff barriers around rules of origin, labor requirements, and environmental regulations.
Since the financial crisis of 2008, many nations embraced larger numbers of nontariff barriers as a means of increasing protectionism. The US has most certainly not been immune. In fact, in a ranking of regimes based on the implementation of new barriers since 2009, economists Erdal Yalcin, Gabriel Felbermayr, and Luisa Kinziusthe ranks the US first:
The United States implemented by far the largest number of non-tariff barriers. With close to 800 non-tariff barriers the US government implemented twice as much protectionist policies as the Indian government,which ranks second.
By this measure, the US is indeed “The by far most protectionist country,” and since 2009
The United States made extensive use of discriminatory state aid measures and subsidies as well as public procurement policies. It accounted for more than 70% of all worldwide implemented public procurement policies and about 25% of all subsidies and state aid barriers.
Among developed countries, tariffs now account for only a small amount of of the trade barrier strategies employed by the regime. All of these new non tariff measures, of course, are piled on top of what nontariff barriers already remained from earlier periods of protectionism. Thus, through a complex system of mandates, rules of origin, domestic subsidies, anti-dumping laws and other barriers, the US has erected a wide variety of impediments to trade that are significant for a wide variety of trade partners. (Yalcin, et al suggest were it not for its nontariff barriers, the US would export 48 billions more in goods, and import 74 billion more.)
Not surprisingly, comparisons with other countries’ trade policies today does not reveal a United States that is a world leader in trade freedom. According to economist Agnieszka Gehringer:
The United States has the highest non-ad-valorem average duty rate of 8.7%, the third highest maximum duty rate of 350% and offers a duty-free rate only to a moderate share of its imports (45.9%, compared with 75.8% in Canada, 53% in Japan and 50.1% in Mexico). … The U.S. appears to be the most intensive user of non-tariff barriers in general and in their main categories … This is true when looking at the total count of measures applied and at the number of product lines … to which such measures apply.
Total Count and Number of Product Categories of Nontariff Barriers in Place at the End of December 2016:

Source:  Agnieszka Gehringer, Flossbach von Storch Research Institute
This strongly suggests that the picture of US trade policy often painted by protectionists — namely that the US naively pursues free trade at all costs and is thus victimized by more protectionist regimes — is highly inaccurate.
The US government employs a wide variety of trade controls, but prefers tools other than tariffs. Thus, attempting to compare US trade policy with policies of other regimes based solely on tariff rates is misleading at best.
Unfortunately, there is very limited information as to how trade policies across nations compare when both tariff and non-tariff barriers are combined. This stems largely from the fact nontariff barriers are extremely difficult to quantify. Tariffs, of course, are easy to observe and to compare across regimes. Nearly all governments compile and openly publish this information.  Nontariff barriers, on the other hand, are extremely diverse and varying in their impact. There is not even agreement among researches as to which policies even constitute nontariff barriers.
This also means we are unable to answer a key question: given that tariff rates are not in themselves a complete picture of the nation’s level of protectionism, how does protectionism in the United States today compare to protectionism in the past? Even granting that protectionism is less now than in the past: how much more liberal is trade policy today? This is a difficult question to answer.
While the US had haphazardly used nontariff barriers in the 19th century, they were nothing like what we encounter today in the enormous trade bureaucracy we now have. Moreover, we can’t measure liberalization in terms of trade. While there is no doubt international trade has increased for most countries in recent decades, it remains unclear if this is due primarily to liberalization or to many other factors that have been shown to increase international trade.
Even if liberalization has been sizable, the fact remains most protectionists greatly overstate the extent to which US import controls have been abolished. We cannot assume that increases in international trade and increased competitiveness for domestic US firms has been simply a function of liberalization. Nor can we accurately portray global US trade efforts as ones in which the US dogmatically embraces free trade.  Yes, many tariff rates are now very low. But in many cases those low tariffs on contingent on meeting a large number of requirements imposed by US policymakers.
Those who fail to meet these requirements, of course, will see their goods refused at the border, or subject to much higher tariffs. Those on the American side of the border who trade with non-government-approved foreigners in a non-government-approved way will ultimately be subject to fines and imprisonment. This, of course, is the end game of all protectionists: enforcement requires Americans be locked in cages for violating US trade law. And there are many trade laws indeed.
Related Articles: