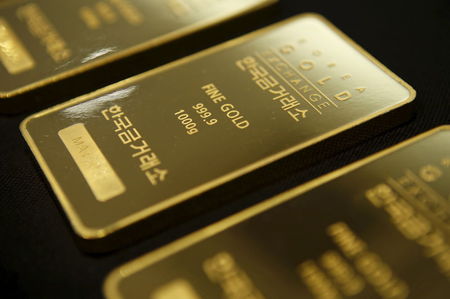 By Geoffrey Smith
Investing.com — Gold prices rose for a second-straight day on Thursday as the momentum behind this week’s rally in risk assets faded ahead of the U.S. nonfarm payrolls report on Friday.
By 11:10 AM ET (1610 GMT), for delivery on the Comex exchange were up 0.3% at $1,567.15, while was up 0.4% at $1,563.38 – both well within their recent ranges.
That was despite a further rise in U.S. yields and a two-month high for the that tracks the greenback against a basket of developed market currencies. Both of those tend to weigh on the price of gold, which has no nominal return and which is priced in dollars.
The combination of a strong dollar and high demand from U.S. portfolio investors has eaten into demand from final users such as the jewelry sector in recent months. That means that portfolio investment is the main factor sustaining gold prices at their current levels.
Data compiled by the World Gold Council indicate that assets under management at ETFs backed by gold hit an all-time high last week, with net inflows of over $1.3 billion – the bulk of which came from Europe, as the fall in bond yields caused by fear of the coronavirus enhanced the relative attractiveness of gold.
The amount of global debt trading with negative yields is back above $14 trillion, with $5.8 trillion of that eurozone government debt, Reuters reported earlier this week, citing Tradeweb data. That’s the highest level since September.
“The rush of safe-haven buying has likely reversed, with some further liquidations from the record stockpile of ETF [exchange-traded-fund] holdings and extended positioning not off the table,” analysts at Toronto Dominion Securities said in a research note Thursday. They added that with gold being a “crowded” trade for now, range-trading is to be expected in the near term, although “continue suppression of real rates across the globe will keep the gold bug alive in 2020.”
Two big emerging market central banks cut interest rates on Wednesday in Brazil and Thailand. However, the global trend towards monetary accommodation was bucked on Thursday by the Czech National Bank, which unexpectedly raised its key rate by 25 basis points. Earlier, European Central Bank President Christine Lagarde had warned the scope for further monetary support had been “much reduced” by previous easing, in what appeared to continue a subtle shift away from the stance of her predecessor Mario Draghi, who rarely acknowledged limits to the ECB’s firepower.
Elsewhere, rose 1.1% to $17.79 an ounce, while fell 2.1% to $966.85.
futures continued their recovery after Wednesday’s sharp bounce, rising another 0.9% to $2.60 a pound.
Disclaimer: Fusion Media would like to remind you that the data contained in this website is not necessarily real-time nor accurate. All CFDs (stocks, indexes, futures) and Forex prices are not provided by exchanges but rather by market makers, and so prices may not be accurate and may differ from the actual market price, meaning prices are indicative and not appropriate for trading purposes. Therefore Fusion Media doesn`t bear any responsibility for any trading losses you might incur as a result of using this data.Fusion Media or anyone involved with Fusion Media will not accept any liability for loss or damage as a result of reliance on the information including data, quotes, charts and buy/sell signals contained within this website. Please be fully informed regarding the risks and costs associated with trading the financial markets, it is one of the riskiest investment forms possible.