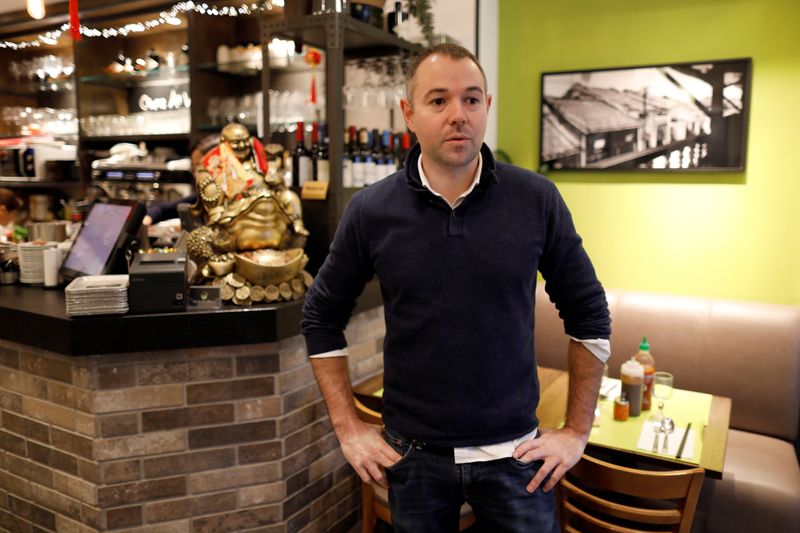 By Caroline Pailliez and Johnny Cotton
PARIS (Reuters) – In a southeastern Paris district known as the go-to place for Asian cuisine, business is down at Pascal Corlier’s Vietnamese restaurant, a side-effect of China’s coronavirus health scare that has sparked panic and a rise in xenophobic incidents.
Some nervous customers have begun to ask waiting staff if they are Chinese, according to Corlier, whose Vietnamese father-in-law runs the kitchen and serves up traditional dishes like pho soup. Others are simply staying away.
“There’s a sort of unfounded psychosis setting in around the Asian community and Asian food,” the restaurateur said, adding that his revenues were down 40% for the first few weeks of 2020 compared to the same period a year ago.
The virus outbreak that began in the central Chinese city of Wuhan has infected more than 9,800 people – mostly in China but with some 130 cases in 24 countries and regions outside mainland China, including six cases in France. It has killed 213 people in China and sparked a wave of travel curbs and other efforts to stop the spread, both inside China and abroad.
As well as Chinese nationals, France’s big Asian community includes many people of Cambodian and Laotian descent, and one of the largest contingents of Vietnamese overseas — a legacy of France’s former colonial presence in south-east Asia.
Asians in France this week created a Twitter hashtag #Jenesuispasunvirus (“I am not a virus”) to signal abuse. Racist incidents, slights and slurs have been reported from the school playground to supermarkets, according to Laetitia Chhiv, who runs an association for young people of Chinese descent.
“We had a student of Chinese origin in Strasbourg who was shouted at by a woman who told him not to touch the avocados she wanted to buy,” Chhiv said. “That was after she asked him where he was from and whether he had the virus.”
Worries over the virus are reverberating across Paris in other ways too, with high-end stores that rely on Chinese tour groups hurting as the flow of visitors dries up. At some retailers, staff said French customers were also staying away, partly out of fear of mingling with Asian clients.
“Racism against Asians is spreading even faster than the virus,” said Sun-Lay Tan, who works in the art world and is French-born of Chinese and Cambodian descent.
“I was sitting on the metro on my way to work and the person next to me edged a few centimeters away and put his scarf over his mouth. I was shocked.”
Corlier, the restaurant owner, whose wife is from Vietnam, said even his children had felt stigmatized and saw people covering their faces.
A Chinese teacher at a prestigious Parisian high school wrote to parents this week to explain she had not traveled to China in years, according to an email seen by Reuters.”People are panicking, so it’s hard to hold it against them,” Corlier said. “But they have to take a step back … and look at the facts.”
Disclaimer: Fusion Media would like to remind you that the data contained in this website is not necessarily real-time nor accurate. All CFDs (stocks, indexes, futures) and Forex prices are not provided by exchanges but rather by market makers, and so prices may not be accurate and may differ from the actual market price, meaning prices are indicative and not appropriate for trading purposes. Therefore Fusion Media doesn`t bear any responsibility for any trading losses you might incur as a result of using this data.Fusion Media or anyone involved with Fusion Media will not accept any liability for loss or damage as a result of reliance on the information including data, quotes, charts and buy/sell signals contained within this website. Please be fully informed regarding the risks and costs associated with trading the financial markets, it is one of the riskiest investment forms possible.